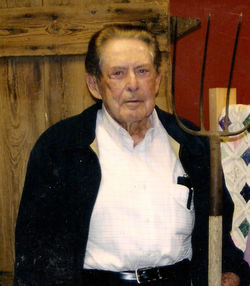 Bennett: Mr. Clinton "Russell" Powers 86, of 7808 Howard Mill Rd., Bennett passed away April 24, 2013 at Randolph Hospice House in Asheboro. A Memorial service will be conducted Saturday, April 27, 2013 at 2 pm at Joyce-Brady Chapel, 3833 Chatham St., Bennett, NC 27208 with Rev. Tim Powers officiating. His request was to be cremated, so there will be no grave site.
Mr. Powers was a Randolph County native and in 1950 he started Powers Trucking Company. In 1965 he started Mid-State Farms which he owned and operated until 1982. He was preceded in death by his wife of 65 years, Margaret T. Powers.
Mr. Powers is survived by Sons- Ronald Powers, of Bennett, and David Powers, & wife Sheila of Bear Creek. Granddaughter- Misty Murray & husband Travis of Bennett.Brother- Curtis Powerrs Jr. of Bennett. His beloved pet dog of 12 years " Josie".
Visitation will be held 1 hour prior to the service at the funeral home. In lieu of flowers the family has asked that donations be made to the Humane Society or your Local Pet Rescue. You may offer online condolences at www.joycebradychapel.com
Joyce-Brady Chapel is serving the Powers family.

To order memorial trees or send flowers to the family in memory of Russell Powers, please visit our flower store.