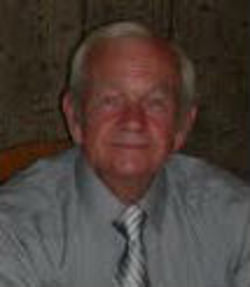 Garrette Earle Phillips, son of the late W. Barringer and Velma Jones Phillips passed away at First Health Hospice in Pinehurst on September 4, 2013.

Funeral service will be conducted at 2 pm on Saturday, September 7, 2013 at Fair Promise United Methodist Church, Glendon, NC with the Rev. Tony Baurichter officiating. Interment will follow in the church cemetery.

Mr. Phillips was born July 24, 1940 and resided at 6414 Hwy 42, Bear Creek, NC
He graduated from Bonlee High School and began a career in radio announcing. He was an
announcer at various stations in NC and SC, including WNCA in Siler City. Several years later he returned to Bear Creek to enjoy life in the country where he grew up.

He was as an installer for AC Corporation where he worked with his brother for many years. Earl also delivered papers for the Courier Tribune for many years.


He was a life time member of Fair Promise UMC, where he was church organist for several decades. He gave many hours of volunteer work advocating for people with chemical sensitivities. He worked with others and was awarder A PROCLAMATION from our governor recognizing "MULTIPLE CHEMICAL AWARENESS WEEK" in the state of North Carolina

He is survived by one son, Gary Phillips and his wife Christine of the home and a brother, Gerald Phillips and his wife Marian of Siler City.
Visitation will be held on Friday, September 6, 2013 at Joyce-Brady Chapel from 6-8 pm and other times at the home.
The family will also visit with friends following the funeral service at the Fair Promise United Methodist Church Fellowship Hall. Memorials may be made to Fair Promise UMC, 567 River Rd. Robbins NC 27325. You may offer online condolences at www.joycebradychapel.com
Joyce-Brady Chapel is serving the Phillips family.

To order memorial trees or send flowers to the family in memory of Garrette Phillips, please visit our flower store.