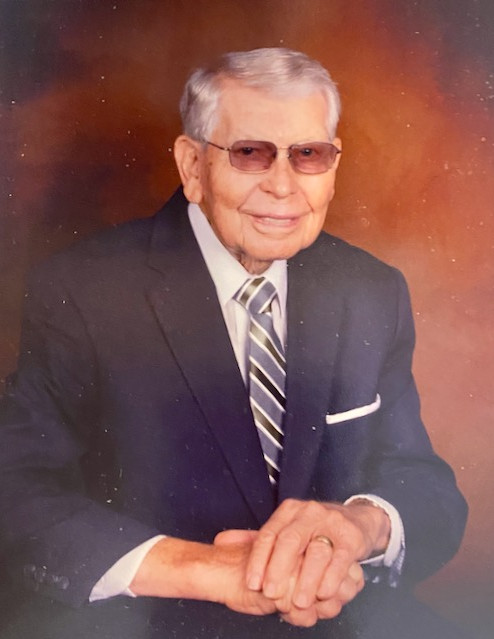 Calvin Edison Powers, 94, of Bennett, passed away on Saturday, October 22, 2022 at Autumn Care in Biscoe. The funeral  will be held on Wednesday, October 26, 2022 at 3:00 p.m. at Beulah Baptist Church with Dr. Neal Jackson presiding. Burial will follow in the church cemetery. The family will receive friends prior to the service from 1:00 p.m.-2:45 p.m. They will return to the fellowship hall after the interment. Joyce-Brady Chapel will be open from 1:00 pm-5:00 pm on Tuesday, October 25, 2022 for friends to sign the register.

Mr. Powers was born in Moore County on April 6, 1928 to Benjamin and Lula Gilliland Powers. He lived in upper Moore County all of his life, until he moved to Autumn Care. His church and education were very important to him. He served in several positions as a member of Beulah Baptist Church. He was a teacher at Bennett School, a principal at High Falls School, a counselor for Moore County Schools and an Associate Superintendent for 23 years. Mr. Powers retired after 37 years in education. After retirement, he enjoyed farming and raising beef cattle. He was known for having large gardens and sharing the vegetables with friends in the community. He treasured spending time with his family.

In addition to his parents, Mr. Powers was preceded in death by his wives, Faye Hayes Powers and Peggy Bailey Powers and one brother, Paul Powers.

Flowers are accepted or donations may be made to Beulah Baptist Church Building Fund, 8454 Howard Mill Rd., Bennett, NC 27208.

Condolences may be offered online at www.joycebradychapel.com.

Joyce-Brady Chapel is honored to serve the Powers Family.

To order memorial trees or send flowers to the family in memory of Edison Powers, please visit our flower store.

Joyce-Brady Chapel open for friends to sign the register